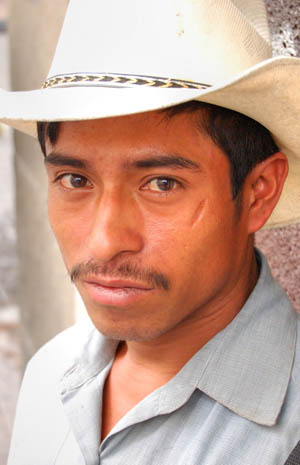 The first illegal immigrant I hired for my construction crew was a small, dark man named José, from the Mexican state of Oaxaca. He called himself a Zapotec, and despite his slight stature he had no difficulty toting ninety-pound sacks of cement or spending an entire day digging a trench. My Spanish was almost as rudimentary as his English, but over time I got to know something about his life, how he grew up in a large campesino family and left to come north because, like so many others like him, it was his only chance to escape a life of poverty, to make enough money to realize his dream, which was to buy a car, get married and have children, and maybe, in his old age, go back to the village in Oaxaca and die there and be buried with his parents and grandparents and others who worked hard all their lives with nothing to show for it. Or so I understood.

I didn’t have work for him every day, but when I did I knew I’d find him on a certain street corner. La esquina, he called it, where men congregated early in the morning hoping to be picked up by a contractor or someone needing a laborer for the day. Then one morning when I went to pick him up he wasn’t there, and when I looked at the faces of the men who whistled and waved whenever a work truck came into view I sensed what proved to be true, that I would never see him again. He may have been snatched by la migra. He may have gotten a steadier job. He may have just moved on, to another part of the city. To another city, or another state, looking for some kind of permanence in a life defined every day by the uncertainty of making money and buying a car and realizing the other elements of his dream.

Replacing José was the simplest thing in the world, of course. It only required stopping at the corner and pointing to one of the men amidst those eagerly, sometimes desperately, straining to be chosen. The fact that the man I picked after a hasty evaluation involving some superficial elements of appearance was in the country illegally, and that I was breaking a law by hiring him, seemed irrelevant, like a theory people debate that has no application to reality. I needed someone to carry sacks of cement, and dig a trench, and there were men standing right there on the corner willing and ready to do those jobs. They weren’t out there with the intention of stealing or committing some mayhem, but of doing an honest day’s work. I wasn’t looking for help in some nefarious activity, but in building and remodeling houses. That we should do something mutually beneficial in a process of making a positive contribution to society didn’t seem wrong, but eminently right.

Around the lumber yard and building supply house I would hear periodic rumors of immigration agents staking out the “corners” and taking down license numbers and later charging employers with violating federal law. A builder I knew put me in touch with a man who could supply laborers; I called him the night before I needed someone and the next morning he brought a man named Santiago to the job site, a lean young man who worked with such diligence and sense of purpose that I started thinking about how I could make him a permanent member of the crew. Santiago, I learned, was from El Salvador, and when he first arrived in the city he slept for a week in the weeds beneath a freeway overpass. Now he lived in a one-bedroom apartment with nine other people, where he not only slept on the floor but usually had to sit on it because there weren’t enough chairs. One day on my way to a job site I spotted some scruffy plastic chairs at a yard sale, and I paid three dollars for one and gave it to Santiago, whose gratitude was so effusive that I couldn’t help dwelling on the immense distance between my life and his, how someone’s happiness could depend upon such a small effort, such a minor act of charity.

But like José he disappeared, and the man who brought him to me either knew nothing, or didn’t wish to tell me what he knew. Jose, Santiago, then Miguel, another diligent worker who hadn’t seen his wife and child in El Salvador for more than three years. Most days he was willing to work as long as I needed him to, but on Friday afternoons he always wanted to leave at a certain hour so that he could take the cash I gave him to the place where he would send some of it—most of it, for all I knew—to his family. At the lumber yard I talked to another contractor who said he had a worker from El Salvador who was on some kind of death list there, and was trying to help him get the papers needed to legally stay in the U.S. I didn’t think Miguel fit that category, but I nevertheless got an INS application for a work permit and read it over and talked to a person who was part of a Central American advocacy group and concluded that the idea was futile. I understood from Miguel, however, that he could get anything—green card, driver’s license, social security card—if he just had the money to pay for it. It occurred to me that I could give or loan him this money, but upon reflection I decided that it wasn’t in my best interests to help someone commit such fraud, even if it meant that he–like José and Santiago—just wanted to live a dream like my own, a good job, a home, a family—but unlike me, might one day simply disappear.

PrevPreviousLIFE, DEATH AND MANSIONIZATION
NextTHE QUEENS GAMBIT, AND THE FICTION OF CHESSNext