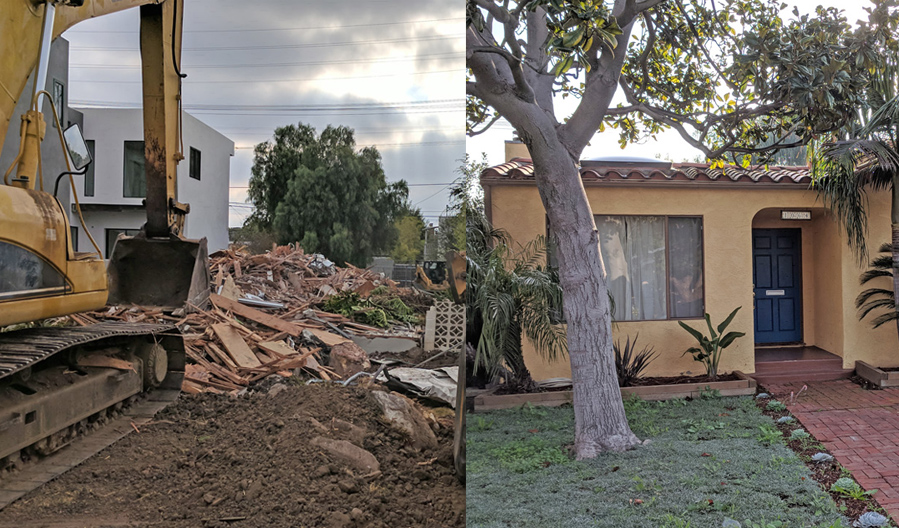 This is the story of Jack and Nancy Wright. It is also the story of mansionization, the term of art for tearing down modest, perfectly livable houses and building what are pejoratively called “McMansions” in their place. In the Venice district of Los Angeles where my wife and I have lived for thirty-two years, this phenomenon has swept through the community like a tsunami from the nearby ocean, destroying the economic and ethnic diversity of middle-class neighborhoods like ours and threatening to turn them into exclusive enclaves of the rich.

Jack and Nancy lived five doors away on our quiet, residential street just over a mile from Venice beach and the major tourist attraction of Ocean Front Walk. The area was largely farmland before World War II, but the need to house returning GI’s and workers in a burgeoning aircraft and aerospace industry spurred rapid postwar development, primarily tracts of single-family houses and a scattering of small apartment buildings. When we moved here the street and others around it were populated by both working people and professionals of all ages–artists, musicians, and writers lived next door to plumbers, contractors, electricians, schoolteachers, accountants. Young couples just starting their families lived alongside elderly people who had been in the same houses for as long as sixty years. While predominately white, there were also Latinos, African-Americans, and members of other ethnic groups.

Jack and Nancy bought their house in the 1970s, when both worked as public school teachers. Jack had a keen interest in history, and self-published a historical novel narrated by an ancient Greek physician. He possessed a broad knowledge of art history and after retirement became a volunteer docent at the Los Angeles County Museum of Art. Nancy was a skilled potter who held periodic sales at her home studio, and a number of neighbors, including my wife and I, owned cups, bowls and other pieces of the ceramic art she crafted. They had no children, and spent lots of time outdoors, hiking, skiing, and swimming in the nearby ocean.

I last saw Jack on a hot July day in 2016. A year earlier, the Gonzalez family who lived two doors to the east had decided to take advantage of a lively real estate market and sell the three-bedroom house they had owned for thirty years. They had gone to some trouble to make the house attractive to buyers, painting, refinishing wood floors, and sprucing up the landscaping, but instead of another family it was a Las Vegas real estate developer who quickly bought the house for the asking price of $1.3 million. Up to that point our street had escaped the wave of mansionization pouring into Venice and other Los Angeles communities, but it was clear what was coming.

In a matter of weeks a truck deposited a bulldozer on the site and the house collapsed into a pile of dirt, broken concrete, and the other detritus of building materials ripped from their context. By the end of 2015 the foundation and framing were complete for a two-story, 4,000 sq. ft. house with a pool, spa, and roof deck with a built-in barbecue grille and fire pit. While that size may seem modest in comparison to houses in places like Bel Air and Beverly Hills, the lots on our street are only forty feet wide, and the box-like structure took up all the legally allowable building space and plunged its one-story neighbors into perpetual shadow.

The next domino fell while that house was still under construction. A middle-aged woman named Diana who lived next door to Jack and Nancy in a three-bedroom bungalow told a neighbor that the Las Vegas developer made an offer for her house that she couldn’t refuse even though she hadn’t been planning to sell. In just a few weeks she and the nephew who lived with her were gone, and in the summer of 2016 a bulldozer rumbled onto that lot. The construction had become a topic of conversation for neighbors—the sheer size and bulk of the buildings, the constant noise, the dust, the work vehicles that took up much of the street’s parking. Jack, who had turned 83 that year, was particularly vocal about the uninvited changes to the neighborhood that he and Nancy had chosen because it was a place where they could establish a kind of sanctuary from the clamor and bustle of much of the city.

One afternoon as I was walking our dog, I saw Jack standing on the sidewalk across the street, watching the machine chew through his erstwhile next-door neighbor’s house. I crossed over to say hello and exchange a few words of commiseration. He was more reserved than Nancy, although always friendly and ready to chat for a few minutes, but when I said something like, “I’m sorry you’ll have to put up with all that construction right next door,” he didn’t respond, but just glanced at me with a look of agitation before turning to stare at the ongoing destruction. “He seems pretty upset,” I told my wife later that day. “I don’t blame him.”

That was the last time I saw him. Two days later I was walking our dog again when I saw Nancy leave their house and head west, in the direction of the beach. This wasn’t unusual. She was 85 but had long been physically active, and could often be seen out walking. My wife and I and some other neighbors had noticed that she was becoming forgetful, often repeating things she had said the last time we saw her, but we took that to be more a consequence of her age than a sign of creeping dementia. She loved our standard poodle, and always remembered her name, and as usual there was a animated display of affection on her part. That was the last time I saw Nancy.

The first McMansion built where the Gonzalez family lived went on the market in the spring of 2017, with an asking price of just under $4 million. It stood unsold for almost three years, although it was listed for a time on Airbnb and became the scene of noisy parties that tormented neighbors and generated early morning calls to the police. Late last year, it was bought by a player for the L.A. Clippers. The second, where Diana lived with her nephew, was sold in the summer of 2018 for $3.5 million to a doctor and his wife who live alone in the 3,400 sq. ft. house. Jack and Nancy’s modest, one-story house is gone as well, replaced by another hulking, two-story box that sold for $3.4 million. A woman now living there told a neighbor that she was the great-great granddaughter of Henry Ford. And there are four more McMansions on the block. Three sold for more than $3 million, and the fourth, just two doors away, is now on the market and priced accordingly. A white, two-story box, it further occludes the coral sunsets we used to enjoy from our back yard.

Who can afford a house costing more than $3 million? Not my wife and I, not the neighbors we’ve gotten to know and call friends over the past thirty years. We were foolish enough to think that our street would keep its character when in fact enonomic and social forces were conspiring to turn it into something entirely different. We could join the train of sellers, of course; hardly a day goes by without a communication in the mailbox from a realtor wanting to know if we’re ready to sieze this golden opportunity to make many times what we paid for the place. But we’ve remodeled it to our liking, we’ve turned the front and back yards into lush gardens where my wife can indulge her love of plants, and if we could somehow find a house in a desirable neighborhood that we could afford the rigors of moving to a new place have no appeal.

Jack and Nancy found the idea of a McMansion looming just feet away from the sanctuary they had established to be intolerable, but they didn’t give in to the blandishments of real estate speculators and sign over their deed. On the morning of July 27, 2016, when the construction crew arrived to work, they saw a man hanging from a tree in the backyard of the house next door. It was Jack, who had apparently fixed a rope around his neck and then shot himself. When police arrived and went into the house, they found Nancy sprawled on the bed, a lethal gunshot through her skull.

According to the police, Jack left a letter with details about what he believed to be Nancy’s growing dementia, mentioning a suicide pact they made in the event either of them became mentally incapacitated. The letter wasn’t public, so it isn’t known if he wrote anything about the construction next door, the changes in the neighborhood that clearly agitated him. But arranging for his body to hang in full sight of the construction crew must have been intentional, a middle finger to the builder and anyone who facilitated the destruction of a perfectly good house and by extension, an entire neighborhood.

I think of Jack and Nancy when I see one of our new neighbors, the doctor, leave for work or come home in his low-slung sports car, a model that retails for well over six figures. Or when I see a long black SUV with a driver waiting to take the basketball player somewhere. I have no reason to believe that these new neighbors aren’t exemplary citizens, but I can’t help but compare the doctor’s car or the SUV to Jack and Nancy’s 10 year-old Honda Civic and see an emblem of the change that has made the neighborhood feel cold and inhospitable. On my past walks I would see Diana and her nephew and members of the Gonzalez family and one or both of a young couple with their small daughter who lived where the latest McMansion now looms. They would be coming or going, or just hanging out in their front yards, and it was always pleasant to stop and chat for a minute or two. We didn’t necessarily share religious or political beliefs and we didn’t mingle socially, but they were neighbors, and part of a fabric that has been frayed and can never be made new again.