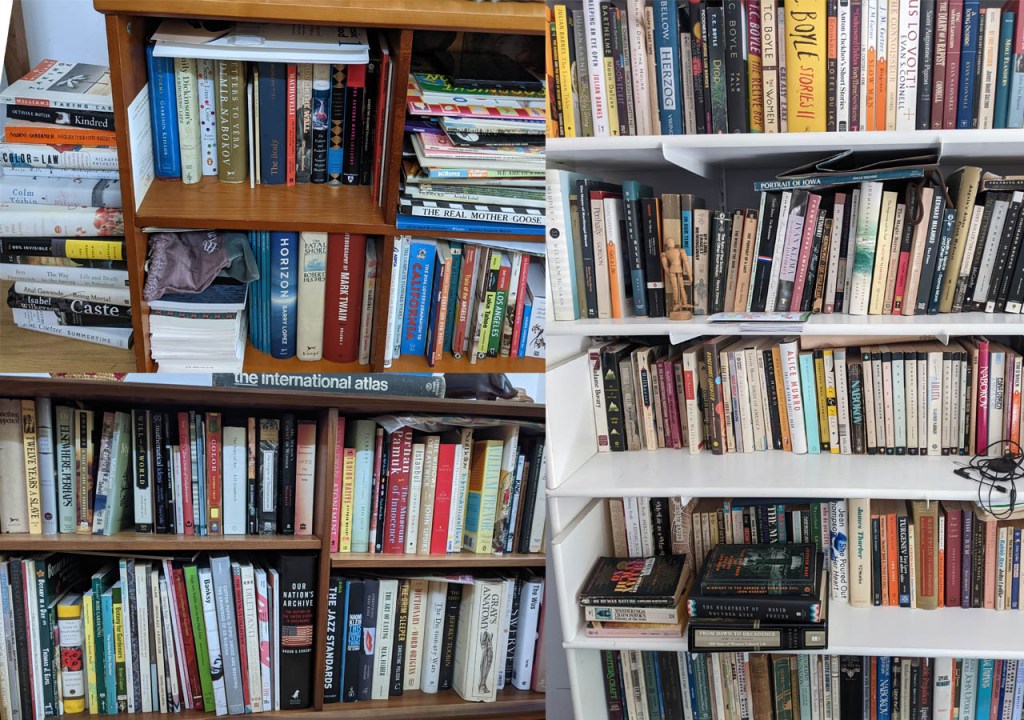 I recently finished reading Citizen, Simon Schama’s long, densely detailed history of the French Revolution. I came to the book by way of Hilary Mantel’s A Place of Greater Safety, a novel that views the French Revolution through the lives of three historical figures who played major roles in that turbulent upheaval. Mantel, author of the brilliant Wolf Hall series, is a fiction writer, while Schama is a noted historian and author of many books on a diverse array of topics. With its wealth of detail and thorough analysis of the causes of the unrest that led to the overthrow of the monarchy and the short-lived people’s republic, Citizen has impeccable credentials as a source for anyone seeking to understand that hugely significant moment in history, but A Place of Greater Safety with its cast of characters that rise from the page to become living, breathing human beings gave me a greater sense of how the revolution inspired hope for a radiant future but ultimately destroyed itself.

Does fiction have an innate ability to bring history to life in a way that non-fiction can’t? Mantel is a highly skilled writer, as was Charles Dickens, whose A Tale of Two Cities, also brings us face-to-face with characters in the French Revolution. There are many other novels and historical accounts of the period that I’ve never read, but I have a hard time imagining a more deeply-researched tome than Citizens, or a book that creates a range of intensive human experience and emotion more successfully than A Place of Greater Safety. And it is the latter that dwells in this reader’s mind and casts shadows that reach all the way to the present condition of our own society, with its stark manifestations of inequality and a future veering toward unrest and possible disaster.

The novel’s central figures are Georges Danton, Camille Desmoulins, and Maxmilien Robespierre. Those with only a passing knowledge of the revolution probably know that Robespierre was a major author of the Reign of Terror, the hunting down and execution of those deemed enemies of the republic. Danton, a powerful orator and natural leader, and Desmoulins, a writer of influential revolutionary polemics, were among a circle of friends that included Robespierre and other figures who played less prominent roles. Mantel follows these men from childhood in the French provinces to their adulthood in Paris, where there are lovers, wives, children, all described not only taking part in revolutionary activities, but eating, drinking, having sex, pursuing dreams outside their obsessions with a radical revision of the social and political order.

Schama also writes at some length about these men in Citizens, but he is casting a wider net, making forays into the provinces, where many experienced and regarded the revolution much differently than the populace of Paris. And his catalog of characters is so large that the three men in A Place of Greater Safety can hardly occupy the attention they get from Mantel, whose sympathetic constructions render plain the scars and warts and shortcomings of character that may not have doomed them, but undoubtedly hastened their trips to the guillotine. Schama’s Danton, for instance, begins by leading the people of his own Parisian neighborhood to the revolutionary bulwarks and ends by failing to convince Robespierre and the most radical revolutionaries to put an end to the bloodletting. Mantel’s Danton, by contrast, is a victim of his own hubris, brushing aside the opportunity to escape the looming blade because he believes so strongly that his oratorical powers can sway those who have come to regard him as an enemy. Likewise, Desmoulins and Robespierre. Schama describes them through their writings and speeches, even with a bit of physical description thrown in, but Mantel breathes life into them, allows them to escape the flat surface of the page.

I wouldn’t argue that the fictional lens gives a truer picture of history than a skilled historian’s account, but in hands like Mantel’s it glows with more vibrant colors and sounds. Other novels by other writers, too. Compared to many of the tomes recounting the history of the American Civil War, The Red Badge of Courage, is brief and impressionistic, and yet Stephen Crane’s prose renders the bloody realities of the conflict into a striking visual and aural spectacle that lives in the mind long after the dates and names in historical accounts have lost their power to evoke sounds and images and emotions. A later and very different novel set during the Civil War, MacKinlay Kantor’s Andersonville, likewise paints the details of life in a confederate prison camp so vividly that the horrors of the conflict occupied this reader’s senses more powerfully than any historical account.

I could cite others, and not just novels that place characters, real and otherwise, in settings of war and societal upheaval. Most of Dickens’s novels would not be called historical fiction, strictly speaking, but they create an indelible sense of the Victorian social order that historical accounts are hard-pressed to equal. Uncle Tom’s Cabin, for all its shortcomings as literature, arguably did more to hasten the end of slavery than the many non-fiction publications that described the brutal inhumanity of the system in facts and figures. The Grapes of Wrath does at least as much to show the reality of life in the Great Depression as any comprehensive history of the period, although it does so by casting its gaze on one family’s journey through one piece of the country. It doesn’t tell us how many migrants left the Dust Bowl for California, it doesn’t tell us how many people lost their livelihoods, it doesn’t tell us how many people suffered from hunger and other deprivations. It doesn’t examine the causes of that cataclysmic period of American history. But with a bit of empathy, we can be the Joad family, trying to survive a global, economic disaster by piling their belongings onto a car and setting off on aharrowing trip to a highly uncertain paradise. And if we can feel what they felt, we can “know” what the Great Depression meant.

In the same way, we can feel what Georges Danton and Camille Desmoulins felt as they rode in carts to the guillotine, the new, equitable society they so passionately fought for condemning them—and soon enough, even Robespierre and his Reign of Terror acolytes—to a fate deserved by the vilest criminals. Hilary Mantel has a keen grasp of historical detail, but it’s the fictional elements she constructs that give those details power and meaning and makes one of the most notable periods in modern history burst into life